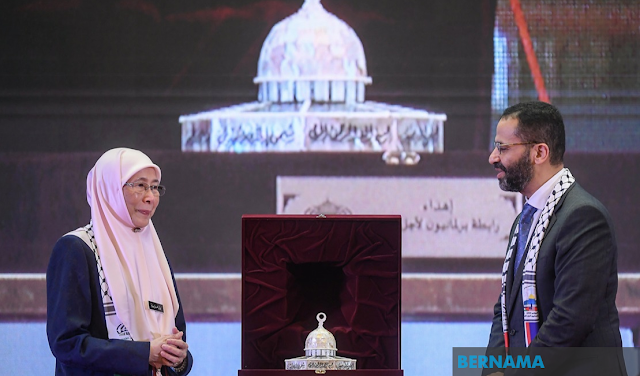 PASUNDAN POST ■ The third World Parliament League Conference for Al-Quds (Palestine) was held in Malaysia on 8-9 February 2020 attended by more than 300 members of Parliament from 40 countries.

With the theme "Towards Effective Strategy to Defend Jerusalem", all speakers and participants from all countries condemned Trump's proposal for the future of Palestine entitled "Deal of the Century".

They assume, Trump's idea illustrates a new plan of aggression on the Palestinian people and their historical improvement over their homeland which is a grave violation of international law and human rights.

Based on various considerations and proposals given by all countries, conference participants formulated to emphasize matters related to Palestine.

First, support the Palestinian right to return and self-determination and fully support Palestine as a sovereign and independent state with Jerusalem as its capital

Second, rejecting and condemning the so-called "Deal of the Century" which is a continuation of a systematic American policy that is biased against Israeli occupation and discrimination against the Palestinian people and is a grave violation of international law and human rights.

Third, any negotiations and agreements that do not give full rights to the Palestinian people will end in failure and will only produce more hostility and hatred, will prevent the achievement of peace and stability in the region and the world.

In the Third Conference, all participants agreed to form a regional committee divided by region to ensure the world struggle to liberate Palestine runs effectively, progressively and produces measurable results.

The Parliament League Conference also decided on the formation of the Central Committee or the leadership of global organizations to be effective and able to absorb the aspirations of Muslims and humanitarian activists in all parts of the world, the President of the World Parliament League for Al-Quds Sheikh Hamid Abdullah al-Ahmar (Yemeni Parliament) and The Central Committee elects two Vice Presidents who will help coordinate the movement for solidarity and the struggle of the world parliament for Al-Quds.